When I had done consulting for ecommerce taxonomy clients years ago, and they would refer to the taxonomy facets for products as “attributes,” I felt that might be confusing, because I considered “attributes” something else: a characteristic like metadata of a taxonomy term or a feature of an ontology. I have since come to realize that facets in some cases, especially in ecommerce, can be considered attributes, and they can even be managed in an ontology that is combined with the taxonomy.

Facets in a faceted taxonomy are various taxonomy term “types” that function as refinements or filters in the user interface for limiting search results on content that share similar types of terms or attributes. Users refine or filter their searches by selecting a term or value from each of two or more facets. In a periodical article research database offered by a library, facets might be subject, geographic place, named person, named organization, article type, publication name. Within an enterprise intranet of enterprise content management system facets might be topic, department, office location, and document type. In a health information service, facets might be symptom, body part, patient age, and  patient gender. In a corporate knowledge base for customer service, facets might be product type, brand name, market, region, issue type, and customer type. In most of these cases, a topical taxonomy is one of the facets, even if that topical taxonomy is hierarchical. The primary taxonomy design challenge in such cases is deciding what kind of information would be useful if separated out in its own facet, and what can remain in the generic topics facet. Using the SKOS (Simple Knowledge Organization System) model, each concept scheme serves as a facet.

In a product, ecommerce or marketplace taxonomy, the hierarchical taxonomy of product types is not one of the facets. This large, hierarchical taxonomy is typically the starting point for user browsing. While not constituting a facet, this hierarchy is linked to the facets. The user navigates or drills down through a hierarchical tree of product categories, until a specific product type is found, and then the facets (attributes) relevant to that product type are made available to the user, allowing the user to refine the search further, by selecting from each of several attributes, such as size, color, material, price, and features. This requires a different approach to the taxonomy design than for the faceted taxonomies described above, and thus these post-hierarchical-browse refinements are better known as and more appropriately called attributes. 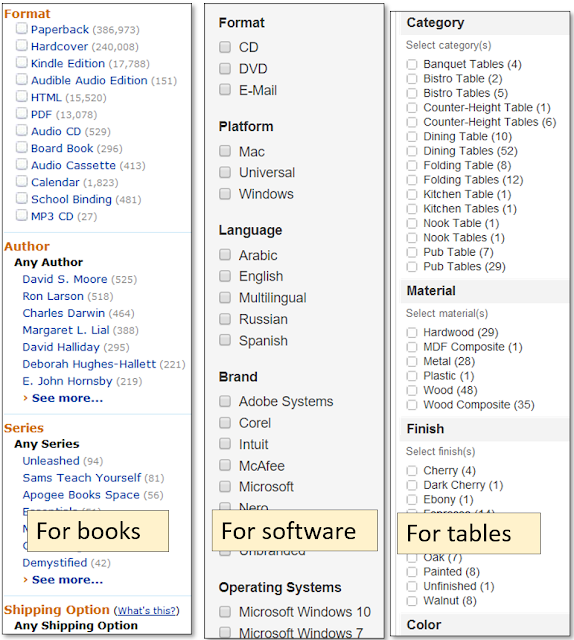 Issues to consider in creating attributes

In a taxonomy where attributes are important, there are various issues to consider. First, shall there be a hierarchical topical taxonomy presented as an initial browse interface to the users? While this is typical for product/ecommerce taxonomies, it is not usually the case for job board taxonomies nor for a taxonomy for movies. However, it may be desired for a taxonomy of nonfiction books or periodicals, which users more often would categorize my subject. A producer or publisher of educational content will likely have a hierarchical taxonomy of disciplines or subject areas. A research-focused organization would also likely have a hierarchical subject taxonomy in addition to the facet-attributes dealing with location, type, funding source/sponsor, researcher name, etc. Having a hierarchical taxonomy outside of the attributes tends to be a user experience design decision, but it has an important impact on how the overall taxonomy is designed and managed.

More attributes may be created than usable for filtering/refining results. For example, products will likely have SKU numbers among their attributes, which can be displayed and perhaps even made searchable, but would not be one of the filtering-facets presented in the user interface. In a taxonomy for finding internal experts, contact information, such as an email address and phone number, would be attributes on each person’s profile, but these would not be searchable fields. Rather, they would display when the person profile is selected. Thus, another issue when creating attributes is determining which will display and function as filters/refinements and which will display only as additional metadata on a selected item.

If an initial hierarchical topical taxonomy is presented to the users, there arises the question of at what point in the hierarchy should the hierarchy of categories should end and further details should be treated instead with attributes? This question often comes up when designing ecommerce taxonomies. For example, to distinguish gas and electric stoves, should each of these types be a narrower term of stoves, or should energy source be an attribute of stoves?

Attributes should be managed as belonging to different types based on their values, such as whether they are of controlled vocabularies, dates, currency, numbers, or a simply a Boolean yes/no, such as Remote being an attribute of jobs. If a hierarchical taxonomy resides outside of the attributes, then controlled vocabulary attributes are an additional part of a larger set of taxonomies/controlled vocabularies. How this is managed varies based on the taxonomy/ontology management tool. For example, such term lists might need to be managed as separate concept schemes in a SKOS taxonomy, even though they are used in ontology-based attributes. It can start getting complicated when an attribute type has different values for different categories in the same hierarchical taxonomy implementation. For example, the attribute of Material could have different values for tables than for clothing, and both categories are offered by the same ecommerce seller.

Attributes add another level or layer of expressivity to a taxonomy or set of controlled vocabularies, which brings it closer to an ontology. The distinction between taxonomy and ontology is not necessarily clear. It’s fine to have just some ontology-like features, such as attributes, but it is recommended to use a taxonomy/ontology management tool, such as PoolParty, which manages taxonomies and ontologies (and anything in between) according to Semantic Web/World Wide Web Consortium (W3C) standards.