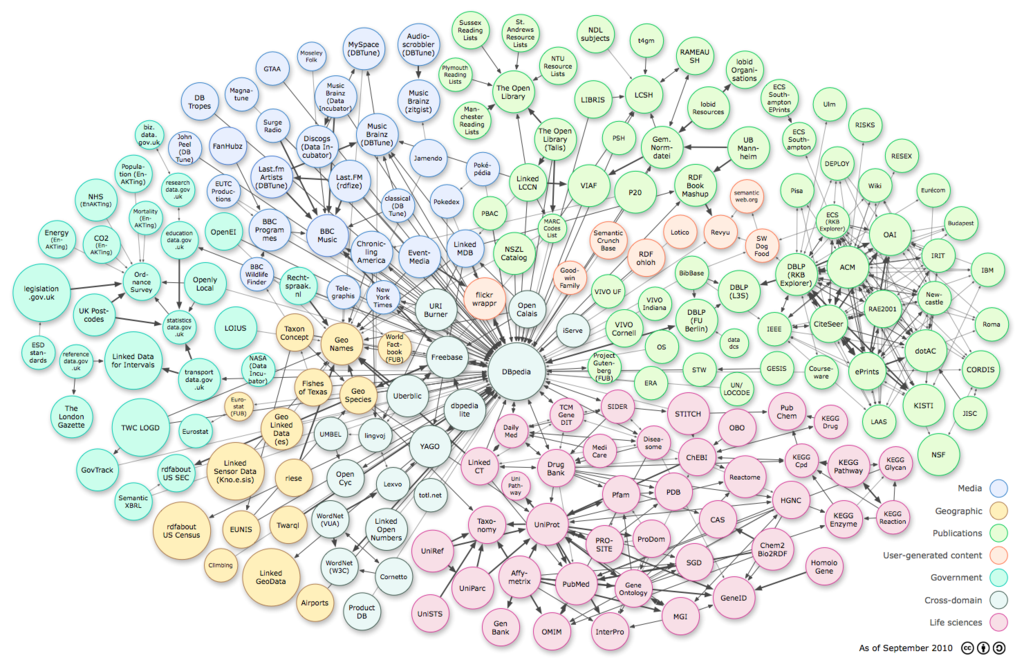 A knowledge graph is the organization and representation of a knowledge base as a graph, with a network of nodes and links, not as tables of rows and columns. As such, it is generally based on data in a graph database, rather than on a relational database, and graph databases are becoming more popular. A knowledge graph usually includes (but is not limited to) visualizations of data, such as of an output of graph analytics, a display of interconnected nodes and links, or a display of linked data in a “fact box.”

Knowledge graphs can serve various roles and provide many benefits. They support search, recommendation engines, e-commerce, and enterprise knowledge management. They can integrate knowledge, serve data governance, provide semantic enrichment to content, bring structured and unstructured data together, provide a unified view of varied unconnected data sources, provide a semantic layer on top of the metadata layer, improve search results beyond mere algorithms, and answer complex user queries instead of merely returning content on a specified topic. An example of a complex query, which can easily be handled by a knowledge graph linked to the right data, but would be very time-consuming if not impossible by traditional search and query methods would be: “Which of the top 10 scholarly journals (by most often cited), published in Europe in the past 3 years discuss knowledge graphs in the context of knowledge organization systems.”

A Google search with Wikipedia results at top returns the article describing Google’s own “Knowledge Graph” (introduced in 2012 and displayed as fact boxes, as in the example screenshot here for Boston) and a see also “Knowledge graph” (lower case), which redirects to the Wikipedia article “Ontology (information science).”

Knowledge graphs and taxonomies, ontologies, and other knowledge organization systems

Knowledge graphs resemble ontologies (a kind of knowledge organization system that is based on taxonomies, but is more complex), but, despite what Wikipedia claims, they are not the same. Knowledge graphs and ontologies both are represented by nodes (things, concepts) and have customized semantic relationships between them. As they both can be visually represented in the same way of nodes and relationships, they may look the same in visualizations. They are both based on RDF (Resource Description Framework) triples (comprising subject-predicate-object), and are usually also based on the Semantic Web standard OWL. All nodes must have their own unique URIs. Specialized software tools are available to create knowledge graphs and ontologies.

There are many conferences that now have sessions on knowledge graphs. I cannot explore all of them, but I have attended and will attend several conferences this year that include knowledge graphs in their programs. VOGIN-IP-lezing 2019 "Search and Findability" at which I spoke in Amsterdam in March had a session on a fashion retailer's knowledge graph and a 2-hour workshop “Enterprise Knowledge Graphs." Data Summit, which I attended earlier this month in Boston, had several sessions that mentioned knowledge graphs, one focused on the topic, "From Structured Text to Knowledge Graphs," but not as something new to be defined, but rather as an accepted technology. I'm excited to be co-presenting (presenting the first part on taxonomies and ontologies) in a pre-conference full-day workshop "Fast Track to Knowledge Graphs and Semantic AI," at the SEMANTiCS conference in Karlsruhe, Germany, on September 9. Then I will be presenting  a "A Brief Introduction to Knowledge Graphs," among other presentations, at Taxonomy Boot Camp London in October.