Taxonomies need not follow strict standards, but rather best practices. There are standards for thesauri (ANSI/NISO Z39.19 and ISO 25964), and as taxonomies are similar to thesauri, it’s a good idea to follow thesaurus standards for taxonomy design to the extent applicable. According to thesaurus standards, terms should be nouns or noun phrases, not verbs or adjectives. Similarly, taxonomies usually comprise terms of only nouns or noun phrases. An exception would be in a faceted taxonomy, where there is a facet for a kind of attribute or characteristic, such as color, and there the terms could be adjectives. In this sense, taxonomies are more flexible and have more applications than thesauri do.

Product taxonomies tend to have adjective terms for some of their facets/attributes, including color, size, style, type, status, etc. These kinds of adjectives are reasonably straight-forward, although there may be nuances among colors and styles that are not generally known among the users of the taxonomy. It is rather other, descriptive adjectives that can be more challenging to include in a taxonomy because their meaning tends to be much more subjective than noun-based terms, and thus it’s difficult to tag/index consistently with them. 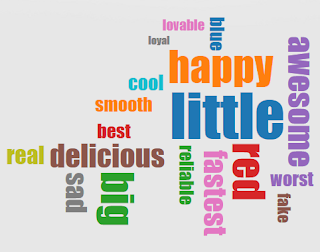 I recently did some work on a taxonomy where descriptive adjectives were included in an “attribute descriptor” term set or facet. This was a taxonomy for images, including photographs, illustrations and graphical design components. Adjective terms included Elegant, Formal, Funny, Ornate, Simple, Modern, Vintage, among others. I also filled in the role of tagging for a short period of time and found how subjective it was to tag with such adjective terms. I was not confident that I was tagging with such adjectives in a consistent manner.  While the adjectives might have seemed like a good idea originally, they were not that practical compared to other components of the taxonomy. Fortunately, the attribute descriptors were not displayed to the user as a dynamic facet but rather supported search, so insufficiencies in adjective tagging were not so obvious.

A recent article in Vogue Business described how adjectives in fashion product ecommerce taxonomies are used, such as by Nordstrom, Rebag, and The Yes. These include terms such as Bright, Chic, Whimsical, Flowy, Billowy, Comfortable, etc. I wouldn’t want to try to tag with those. However, in these cases, the tagging was not manual but automated, using algorithms, hundreds of examples, and machine learning. While auto-categorization is not necessarily more correct than manual tagging, it is more consistent, and when it comes to the subjectivity of adjectives, the challenges are more around consistency than correctness. So, I can see that auto-categorization can be a solution to dealing with the challenges of adjective terms.

Now that it’s established that taxonomies can, in certain circumstances, contain adjective terms, the inclusion of adjectives in a taxonomy should be done with care. If you will have adjectives as terms, my recommendations are:

Posted by Heather Hedden at 9:42 AM