A defining characteristic of taxonomies is that terms/concepts are arranged in broader-narrower hierarchies, which may resemble tree structures. A limited number of top concepts each have narrower concepts, which in turn may have narrower concepts, etc., and the narrowest concepts at the bottom of the hierarchy are sometimes referred to as leaf nodes, as “leaf” extends the metaphor of “tree.” The tree model has its limits, though, because taxonomies may also have occasional cases of “polyhierarchy,” whereby a concept may have two or more broader concepts. 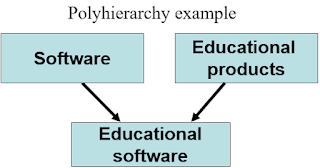 The reason to avoid creating a mixed type polyhierarchyis simply that the browsable hierarchy user experience can get compromised and potentially confusing. Extensive hierarchies with large numbers of narrower concept relationships would result. A hierarchical taxonomy tree should be designed with a dominant hierarchy design. An exception is a thesaurus, which is not designed so much for top-down browsing but for browsing from term to term. Mixing hierarchical types within a thesaurus is thus acceptable.

It is also recommended to avoid creating hierarchical relationships across different facets in a faceted taxonomy. This is because facets are designed to be mutually exclusively, so that concepts from multiple facets can be used in combination to limit/filter/refine a search. As such, facets are designed to be distinct aspects. There could be an occasional exception of polyhierarchy, though, but more than 2-3 polyhierarchies across an entire faceted taxonomy should be a cause for review.

With the wider adoption of the SKOS (Simple Knowledge OrganizationSystem) model for taxonomies and in taxonomy management systems, taxonomies are more commonly organized into concept schemes. A concept scheme can be represented as a facet in a faceted taxonomy, but it is not limited to use as a facet. Utilizing concept schemes, it makes sense to have separate concept schemes with different hierarchical types, some for generic-specific (for type, categories, topics), one or more for whole-part (geography, organizational structures), and some containing lists of instances (named entities). In this model, Washington, DC, would be narrower only to the United States in the whole-part hierarchical concept scheme for geographic places. It could also be linked to Capital cities, which is in a different concept scheme for place types, with a different kind of relationship (“related” or perhaps a semantic relationship from an ontology).

Polyhierarchy concerns concepts in the taxonomy, and it is not about objects, items, or assets that get tagged with taxonomy concepts, such as an individual publication, document, image, product record, etc. Each of these may get tagged with multiple taxonomy concepts, and as such may have multiple “classifications” and thus can appear as if they are in a polyhierarchy, if a frontend application displays tagged items as if they are leaf nodes in a taxonomy.

Some content management systems, which have built-in taxonomy management and tagging features, do not support polyhierarchy. The best known is SharePoint with taxonomies managed in its Term Store feature. Taxonomy terms may be “reused” across Term Sets, but they are not permitted within a Term Set, where it is most suitable. See my past post, Polyhierarchy in the SharePoint Term Store, for more details
Posted by Heather Hedden at 12:52 PM