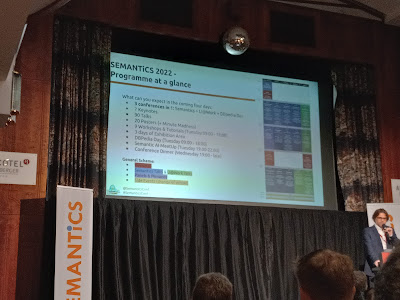 Semantics means “meaning.” Like the words “taxonomy” and “ontology,” there is a traditional meaning that is more academic and, in the case of semantics and ontology, also connected to philosophy, but there is also a modern meaning that deals with information science and knowledge management. For example, “semantic search,” means searching for concepts and ideas, not merely matching search strings of text. Thus, a taxonomy or thesaurus supports semantic search by comprising unambiguous concepts of “things, not strings” of text.

Semantics also implies Semantic Web, with technology that complies with the Semantic Web that have been developed by the World Wide Web Consortium (W3C). The Semantic Web, also known as Web 3.0, is not component of the World Wide Web nor a different web, but rather a kind of extension of the web to include not merely content and simple hyperlinks, but also all kinds of data that is semantically linked (where the links/relationships also have meaning). The Semantic Web allows more complex data, and data stored and organized in graph databases, to be machine-readable. This could be either on the public web or within an organization that follows Semantic Web standards for managing its data and content.

Taxonomies were mentioned in a number of other presentations as a given foundation to ontologies, semantic networks, or knowledge graphs. For example, taxonomies and ontologies were the basis of knowledge-based recommendation system, described by Andreas Blumauer in his presentation on that subject. In her talk “ Real World Case Studies: Five Success Factors to Implementing an Enterprise Data Fabric,” Lulit Tesfaye explained that the components of a data fabric are metadata, taxonomy, ontology, knowledge graph, connections and integrations, and front-end applications.

A session titled Taxonomies included a talk on “Taxonomy and Terminology,” compared and contrasted taxonomies and terminologies with respect to their kinds of terms and purposes, but also explained the semantics role of taxonomies. The presenter, Klaus Fleischmann, said that terminologies guide content creators, ensuring consistent, correct use of language company-wide, whereas taxonomies provide a semantic layer on top of content and metadata, often for semantic applications. Fleischmann also explained that taxonomies can be extended to ontologies or, in his words, taxonomies “modeled relationships via ontologies.”Also speaking in the Taxonomies session, Nimit Mehta whose presentation was titled “The Semantic Data Stack - A user story on building a data fabric,” Mehta described taxonomies as “A layer between your data and your business applications” and a “governance layer.”

Finally, I presented a taxonomy-related tutorial, although not on taxonomy creation alone, but rather titled “Knowledge Engineering of Taxonomies, Thesauri, and Ontologies,” in which I explained that taxonomies and ontologies are not so much distinct knowledge organization systems, but rather than ontologies are a semantic layer that are applied to and extend a taxonomy, giving it a greater degree of semantics.

I hope to participate in the next SEMANTiCS conference in September 2023 in Leipzig, Germany.

Posted by Heather Hedden at 1:18 PM