The third edition of my book, The Accidental Taxonomist, will officially be published November 7, but discount preorders are now being accepted for both print and ebook, and I just received  advance printed copies, so now is a good time to talk about. Details of the book are on its website. For those who wonder how this edition differs from the prior edition, I discuss that in the preface of the 3rd edition, which I have copied here.

I am thrilled that taxonomies are as relevant now as they were when I was writing my first edition in 2009 and second edition in 2015 and even more so. Some people had previously thought that improved search algorithms would largely replace the need for taxonomies, but users want to be able to select search refinement terms, and the greater adoption of search has led to more taxonomies. Some thought that AI technologies of text analytics and auto-classification might replace human-created taxonomies, but, on the contrary, they made taxonomies more valuable. Some thought that ontologies would replace taxonomies, but instead ontologies have connected and extended taxonomies, providing additional uses for taxonomies. Innovations and trends in digital content and data have given rise to new uses for taxonomies, including support for recommendation, personalization, data-centric enterprise knowledge management, voice of the customer analysis, and chatbot design. 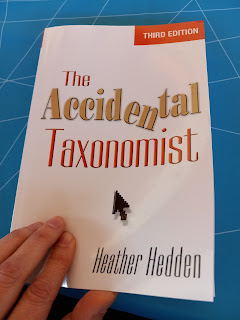 There are signs of interest in taxonomies in various places: social media posts, conference presentations and workshops in a greater number of different conferences, and a continued strong enrollment trends in my online taxonomy course. Taxonomy consultants I know are doing well with business. A search on “taxonomy” in Google Trends shows a continued steady interest in the term since around 2006. Members of the Taxonomy and Ontology Community of Practice LinkedIn group has grown from 3,330 in 2015 to 5,564 in June 2022. More people continually get involved in taxonomy work, as our survey of taxonomists indicates relatively more people with fewer years of experience. (See Appendix A, Question 2.) The number of jobs for taxonomists continues to increase, as evidenced by repeated taxonomy job searches over the years on job boards, job alert postings, and direct queries colleagues of mine have reported receiving from recruiters. The trend toward remote work, especially for knowledge workers, has opened up more job possibilities for taxonomists, who are no longer limited by their geographic location, which had previously been an issue for this very niche specialization. We may soon see more digital nomad taxonomists living and working all over the world.

Meanwhile, as I have continued to engage in taxonomist discourse, consulted for more taxonomy clients, and attended and created new conference presentations, I have continued to learn more and thus refine how I understand and explain taxonomies. It is time that this book also catches up to how I have been explaining taxonomies in my most recent presentations and workshops. I have even revised my thinking on the definitions and types of controlled vocabularies, so the definitions and types section of chapter 1 has been rewritten in this edition. Also in the first chapter, additional uses for taxonomies have been included.

In addition, perspectives on taxonomies have gradually changed, and I am finally catching up. One of the main updates to this third edition has been to move decisively from the traditional thesaurus model and adoption of the language of the SKOS (Simple Knowledge Organization System) with respect to taxonomies. Most significantly this means referring to concepts and their labels and not to terms. An oft repeated phrase is that it’s about “things, not strings.” Concepts are things, whereas terms, as words or phrases, are merely strings (of text). This has also involved removing the equivalence relationship section from the chapter on relationships and adding a section on alternative labels to the chapter Creating Concepts and Labels (which has been renamed from Creating Terms).

When I updated the 2nd edition, I was working at the time for a library database vendor, so my perspective was somewhat biased toward that industry and use case, despite having had experience has a consultant too. Now, with not only more consulting experience in the interim, but from the perspective of working for a taxonomy software vendor, I see better the varied uses and implementations of taxonomies. As a result, I have changed number of the examples. I also made updates to the chapter on manual tagging (formerly called human indexing) and replaced many references to “indexing” with “tagging,” in recognition of the more commonly used term, although they are not identical. I had entered this field as an indexer, but I should no longer let my indexing roots influence my perspective. I also cut out some information on thesauri, such as details of the various thesaurus print display formats.

Technologies and vendors change, so the chapters on software and auto-categorization needed updating. There have been evolving trends in software, such as the ability to connect and integrate with other systems through APIs, instead of exporting and importing taxonomies, and including auto-tagging within the same tool. Other updates include data from a new survey, nearly all new screenshots, and updated information on taxonomy courses, conferences, and other resources in the final chapter. About half of the chapter head quotes are also new.

In case you missed it in the preface to the second edition, the updates from the first to the second edition (and thus also updates between the first and the third edition) include the following: managing taxonomies in SharePoint, the relationship between taxonomies and metadata, reference to updated ISO standards of 25964 of 2011 and 2013, the introduction of the SKOS standard, and improved explanations on planning and designing taxonomies, along with results of a new taxonomist survey and software information updates.

Posted by Heather Hedden at 1:32 PM

Email ThisBlogThis!Share to TwitterShare to FacebookShare to Pinterest
Labels: Books on taxonomies